Down at Irah's, Down at Goose Hollow 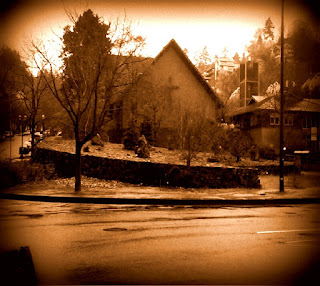 "She loved me for the dangers I had pass'd, and I loved her that she did pity them.” He read back what he had typed - “Wait,  Billy already wrote that, didn't he ..." *

And then "Over the mountains of the Moon, down the valley of the shadow - ride, boldly ride, the shade replied, if you seek for Eldorado. “ Back-spaces rapid-fire through the entire first line - “No, no - Eddy wrote that one” he thought. **

Since they had made conversant past time visitation possible he had talked to so many of the old writers, poets, thinkers, and fools of his kind that the line between his thoughts, his writings, rantings, and revelations, sometimes blurred with those of the past others. Still, he did enjoy the visits greatly more often than not.

Einstein was a hoot, especially after a few shots of schnapps, always a sideways twist to make you look at something again with that one.

Machiavelli, not surprisingly, Ben thought was an ass.

They said it was possibly a side effect of the Sb-5 he had been dosed with at the indian clinic that made him susceptible to the visions. His participation in the trials of the new formula paid for his therapy and a few others. It was part of a government Earned Funding deal the clinic was forced into back in '25.

From his regular overstuffed chair at Irah's coffee house just across from the Goose Hollow rail he watched the college kids in their current fashion gear, ear buds in, eyes trained on mobile screens. Bright shiny young things, some of them destined to change the world yet again “in myriad ways, both subtle and gross.” Ben thought.

Since he had fallen below the income requirement to own a car he spent more time at places like Irah's waiting for trains, or nursing endless cups of the house blend and cruising social media on the house wi-fi with his beat up old Maruishi locked into one of the hanging racks outside.

He would sit and watch all the people, all the things, just watch, and listen. The layers and threads of connections, the nodes in the data between the thousand-thousand things, would start coming to him latter.  Sometimes they came in his dreams, flying through the tangled dream-time oak branches on silent owl wings.  Sometimes he saw them in the abstract patterns that he had first learned from the Sb-5 years before.

Drinking his first Double-Dark Chocolate Ethiopian Drip, almond milk, no foam, triple raw sugar of the day he gazed out the window and across Jefferson Avenue at the roundabout.  In its center was an old, old, Mound Stellar built up of rough boulders to about two meters high.  On the top of the mound, flat tops of the odd boulders angled up to the southwest sky, individual stones stood in a rough circle, perhaps five or six yards across.

No one ever seemed pay much attention to it or go up on top of it though there was nothing preventing it. Nothing of course except the odd "You're not supposed to be here" feeling that most people who might have done got when they reached a certain proximity.  Most of those people forgot both the feeling and the mound as soon as they walked away from it.

Sipping his coffee there he watched as the light on the mound slanted towards that "photographers best" side light. He could have sworn he saw a shimmering there. There was something different, something else there on top besides the expected few small trees and shrubs, besides the sparse tufts of grass growing from between the rocks, besides anything that he recalled a name for.

It could have just been that he was tired. Beyond tired.

This fatigue existed in him in spite of all the advances in technology, or the progress towards a “more orderly and sustainable society". His Dr claimed it was largely neurological, a genetic fault of his, a misfiring of synapses aggravating wildly unbalanced dispersal and uptake of serotonin and dopamine in his brain.

He had hoped to speak with someone more astute, one of the philosophers or mental health people of not too distant history maybe, but then the technology had abruptly broken down, catastrophically, according to all the government and industry spokespersons.

Ben felt himself no longer capable of discerning truth from fiction, propaganda (a banned word) from information. He did know that when conversant past time visitation had come into being there was a general  lack of consensus regarding exactly how that actually worked.***

It was almost time for him to board the Blue Line to Hillsboro. He had the barista top off his go cup, picked up his Gabriel Hounds daypack and headed out the door. He went the longer way towards the stone mound.

Even though he had felt the "Go Away" buzz before, it still came as something of a minor shock to his system and he stumbled just a bit, one of those odd little two-step glitches, but retained his vertical attitude. The closer he got to the edge of the mound the more the buzz manifested itself as a multiple electro-magnetic waveform, capable of simultaneously overpowering in both the utra and sub-sonic ranges. His skin tingled, the hairs on the back of his neck stood at full "Danger, Will Robinson!" attention. At the same time he felt a massive presence, a tangible weight upon his shoulders, as well as a rumbling deep in his bones that told him something big was right in front of him, something huge, something that appeared to be moving towards in slow motion, even as it moved at speeds beyond any attempt to describe or define. It was coming. It was here. Just like that.

He paused and in his peripheral vision he could just see the Methodist church across the street, shimmering wildly, as though seen through heat waves on a Mojave Desert summer day.

He stepped forward again. He heard the customary tinnitus ring in his head take on a new, more energetic vibrato, and again he paused.  He almost expected to be struck dead or at least deaf and blind as he stepped forward again, that one last step, to place his shaking hand on the stone.  Everything stopped.  Every.  Thing.

No sound, no movement of traffic or pedestrians, or anything at all, stirred up close to the roundabout. There was not even the ringing in his ears, utter silence and total stillness was all around him.

He remembered to breath. He climbed up on top of the mound. He looked around.  Loosely spaced around the top of Tsik'to'li Unelanvhi, the eye of God, were rough upright stones, a meter or two tall each.  Ben stepped forward again. He laid his hand on the petite monolith.

If anyone else had gotten close enough to see through the glamour of the mound over the next few years, they might have noticed there on top a weathered daypack, much faded by sun, wind, and rain.  It had been there for all time, a remnant left by an Old One - by Agigalie liga Kway nee, by I-Am-Grateful Ben.

*Othello, Act 1, Scene 3 - http://shakespeare-navigators.com/othello/T13.html
** Eldorado, Edgar Allen Poe - http://www.poemhunter.com/poem/eldorado/
*** It had occurred, it seemed, as an accidental result of a collaboration of indie geeks and volunteers from the Applied Physics Department of the Unseen University trying to find a practical use for the Holographic Theory.

*** It had occurred, it seemed, as an accidental result of a collaboration of indie geeks and volunteers from the Applied Physics Department of the Unseen University trying to find a practical use for the Holographic Theory.

Posted by John Ross Barnes at 5:32 PM No comments: