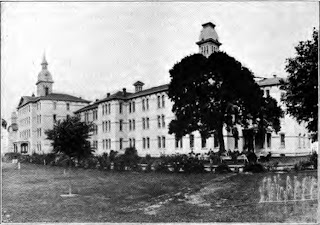 Walking though the dark building, lit only by his flashlight, he thought he felt the air chill. Reaching into his vest of many pockets, Phil pulled out his antiquated BlackBerry and pushed the touch screen. No bars, nothing, not a trace of a signal. He'd find the circuit box somewhere before long. He strolled down one of the old hospital's many basement corridors, checking each room for the main power box. He came to the last door in the line. Oddly, he thought he saw a slight puff of dust blow out from under the door as he swung his light around. Almost like a breath and he wondered where that came from. It turned out not to be the power room. No circuit box in there. Which is not to say there were no boxes. As he panned the light around the crowded interior he saw shelves filled with what appeared to be squat dusty plastic boxes, black with some kind of paper labels, as well as older tin cans, some heavily corroded. He started as he heard a whisper, right behind his left ear. Nothing there. As he walked back out of the room, he could have sworn he heard the whisper again.

In the old hospital, down in the basement, in that room, nothing moved that you could tell, but that didn't mean nothing moved. Dust. And ashes. And, a whisper, as though of some long forgotten memory. Forgotten, but not truly gone. At first, for long decades, there was nothing of awareness. Slowly, almost imperceptibly, they began to remember, to feel, and feeling knew loss. They knew not what they had lost. But they whispered among themselves. They whispered confusion, and darkness, and light. They whispered of bygone days out in the sun, and then of endless times confined within. but within what.

Plans were underway for demolition to begin within a few months, after all the channels had been gone through, paperwork signed, bids taken, more paperwork, then more again.

The phone rang at the Institute for Studies of the Unseen. There was something perhaps of interest down in Salem. Could they come to the old State Hospital? Yes, the one where they made that famous movie. Well, It was no big deal, really, just that they were getting ready to tear it down. No, of course demolition was not ISU's thing, but there were the whisperings. In the Room of Forgotten Souls. Where they kept the cremated remains of patients from the last sixty years. Sure, they could come today, today would be great.

The emf meter went wild, even though the wires had already been stripped out, and not a watt of power in the place. Likewise the Sub and Ultra sonic recorders. Mary and her tech team had to have new apps written to sort it all out. Five thousand voices, all trying to say their names, or the names of living relatives, all at once. The ISU team had tried to bring in a medium to talk to the voices, get them to take turns speaking. They wouldn't shut up long enough to hear the happy medium, overjoyed as he was to be there, for the Great Speaking, as he called it.

Eventually, temporary employees were hired to make the thousands of calls. No one told them where the information they gave had really come from. "We found some old data hidden away". People came from all over the country, and some even from overseas. All came to claim their long lost crazy relatives' ashes. They made great conversation pieces for one's mantle. And if you were quiet, after your dinner guests had all gone home they would whisper, happily, of freedom and release.

Note: The Room of Forgotten Souls is a real place within the old Oregon State Hospital, in Salem Oregon, where the movie "One Flew Over the Cuckoo's Nest" was filmed.

kptv-fox12, in Portland recently did a story on the room, but that link has since been removed from their site.

This Oregon State site, does however have listings of the names of the "Cremains" for those who think they may have relatives there.

Photographer David Maisel has done a fine series of photos of some of the old Cremains cans in his collection Library of Dust. I did not include them in the story because I don't have rights to them. However, you can see them Here.

For further reading on the Oregon State Hospital in Salem, you can start with the Wiki here.
Posted by John Ross Barnes at 5:28 AM 3 comments: