Learning to Ride Einstein's Bicycle, a poem by my brother, Mr. G. Barnes 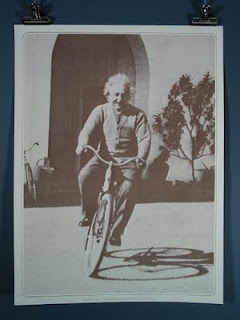 My Big Brother G. is a much better poet than I, and along with my brother Michael, one of my best mentors in all things regarding the arts. What follows is one of my favorites of his, written while he was the Director of Literary Art for the Utah Arts Counsel in 1985.

Careening towards the camera,

mounted happily atop his bicycle,

dressed in his old man cardigan –

we’ve all seen the photograph.

And the celebrated brow,

eyes crinkling at the their corners.

He appears a little wobbly,

but in no danger. He could be pedaling now,

“Once you learn it, it never leaves you!”.

we can almost hear him squeal.

There is delight in the incongruity of the picture;

used to thinking of him bent over his desk,

or lecturing in front of a chalkboard

festooned with formulae, or even walking,

self-absorbed under his homely hat,

his hands pitched deep into the pockets

of his rumpled raincoat, he appears in this photo

so like a child perched there on his bicycle seat.

And on some shelf in Wichita, Kansas,

Einstein’s brain has been preserved

in a very scientific jar. During the years

I’ve known about this, I’ve often thought of it,

pictured it in my mind. The same questions

who did this? why Wichita, Kansas?

was Einstein consulted – did he suggest it, even?

In my imagination I hear someone raving

that technology will catch up to the great brain,

frozen while the decades run ahead.

Someone wants to learn if there’s any more in there

about E=MC2 or something, I expect.

And I remember reading that once a convolution

gets carved into a brain it never fades,

that squads of doctors will find a way to thaw

Einstein’s brain. And I imagine that charged moment,

them in a circle, arrested, reverent

over what they are about to discover. But what they get

is a little gallery of photographs of young Albert

first learning how to ride his bicycle.

Today's post is a guest appearance over at my blogging home away from home Amwriting.org . In which I use the word Stuff way more times than is actually allowed. Please click one more time to visit over there.


Posted by John Ross Barnes at 1:31 PM No comments: 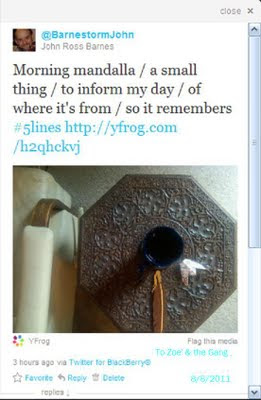 Posted by John Ross Barnes at 1:16 PM No comments:

Email ThisBlogThis!Share to TwitterShare to FacebookShare to Pinterest
Labels: #5lines, #Gogyohka, Forms, Mandalas, This Morning, Where I'm from 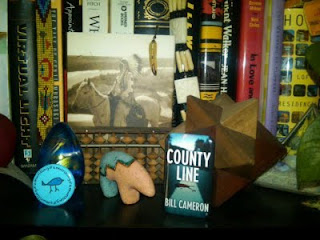 1st Movement: Questions in the Dark

Somewhere in 2010, I think: Browsing through Twitter, reading about writing, trying to catch up on a craft, on an art-form, a life - remembering some words - "So short the life, so long the Craft to learn" - William Morris. I follow one person, I follow another, through The Fog that is this life, this mind, and eventually somehow I stumble upon @Johannaharness and #AmWriting. She wrote something I really liked, and I @replied her to the effect that although I wasn't a "real writer", only writing my little blog, that I appreciated that thing she said.

I didn't really expect a reply. I mean Real writers like someone who could write the Claire Morgaine stories wouldn't be responding to me right? Especially after having just read a scathing post by another writer about unless we "posers and wannabes" had paid our dues(to the degree that she had) we were "Fucking Well NOT writers!"

Oh.So.Wrong. Not only did Johanna respond, she admonished me to stop thinking that misguided way because "Blog Writers ARE writers".
And then she showed me #AmWriting. (Que: Sun breaking through clouds)

I knew myself then, as I know myself now, vaguely, to be "much the same, but wholly Other", and my general theme is still often Sheryl Crow, On the Outside. A haunting tune for a haunted mind.

Winter Two Thousand and Ten, early Two Thousand Eleven - I gradually fell in with the "wrong" crowd. You know, writers, musicians, artists and other Bohos of that general ilk. Yahoo! Now we're having FUN! Did a lot of therapy. Took a lot of pills. Gave up the masque of "normalcy" I'd been not so successfully sporting for so many years and started embracing the Madness and the Fog. Turns out I'm not Mad, yet, just "not like the other boys & girls", and we're all in the Fog sometimes, I just more than most perhaps.

And somewhere in there, through the kind and gentle guidance of Johanna and her band of literary Merry Pranksters within #AmWriting and without, I've begun to develop a voice that I'm not ashamed of, that I'm comfortable having and being. I've come to learn that I'm less Other and more the Same than I thought. This through, dare I say it from within my badger hole, Sharing. Sharing real life stuff to a surprising depth. Being allowed in to know my new friends deal with many head and heart pains similar to mine.

A trust and sense of community and support have become part of that experience for me in a way I have not had craft-wise in many years. Getting in touch with the flow, as it were, learning to be comfortable with the joys and pains of being me, being we. To that end, "let us Pray" - Sarah Mclachlan, Witness

Here I am. All INFJ, Random abstract, Get Those Meds Balanced, Onward Through the Fog, Ta-Tonka Boy in the Sea Cave, Two a.m. Wow, "Love is the Drug for Me" - #AmWriting once again.

#Iam a Loon
Honeymoon in June
It's a thing
It's a thing
Can you hear #TheRING?
It's JUST a THING we use
All payin' our Dues.

Nobody get's out of This Place alive,
but what they must have learnt to strive
And Someone here be singin' The Blues

- And then I hear My #AmWriting theme: Stevie Windwood - Spencer Davis Group GIMME SOME LOVIN'(Every day) 1967

4th Movement: In this New Space.

I could spend all day reading all the great stuff on #AmWriting. But I can't. I've got a lot of sifting to do, here in my head. I've fallen in with another "bad" crowd. The Poets, the #Haiku cookers and addicts of the #Twitterverse too numerous to name here, but I will say, much of the fault for the velocity of my decent in poetry lies with @Moondustwriter and @Coyotesings from over at @Onestopoetry .

As I write here from my comfy sofa, ancient and venerable laptop aboard the "we had a toddler" Ikea coffee table, I look across the room. There is a focal point, a centering place. I keep there bits and pieces, mementos of special times, significant objects and totems of power: the abacus I brought back from Hong Kong in 1976, the miniature book of original Edward Curtis Indian photos, my first Hard copy of a William Gibson book, A hand blown glass gee-gaw from Multnomah Falls, Bear Totem, Glass box of Cannon Beach, and there now at the front, from last April's #Tweetup at Powell's with my #AmWriting "Gang of Six", my County Line pin to go with my copy of Bill @bcmystery Cameron's last book of the same title - And my #AmWriting pin.

And now I'm like that guy in the old song by the Band, "and when they get to the end, he want's to start all over again".The Band, Stage-fright, from Martin Scorsese's THE LAST WALTZ

A Very Happy Birthday to #Amwriting! The next stop on our tour is at the home of Linda Poitevin