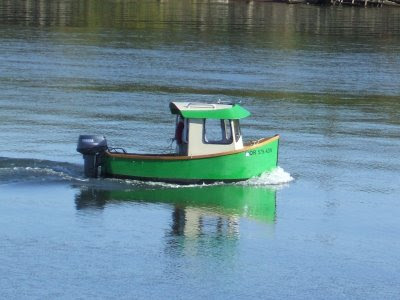 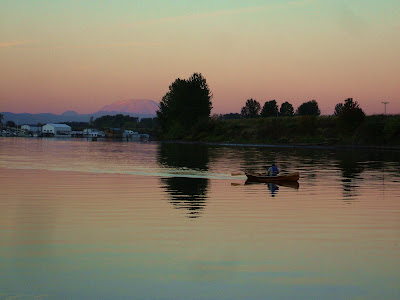 This morning, driving North West on Marine Drive, next to the Columbia River, between the Sea Scout Base and the Airport.......Uncharacteristically warm & sunny for October in Portland.
Kayaker going up the glass-flat river, I imagine with near silence - too far away to hear anyhow.
Black Cormorant sitting on the same snag as always, just ten yards off the near bank, wings held out and still, drying in the sun.
Red Tailed Hawk Crosses my path, maybe twenty feet off the ground, from left to right.
Why is it almost always left to right?
Looking then inland, across the Airport security fence, I see a Great Blue Heron, standing unperturbed as planes taking off and landing make an almost unbroken line of avionic commotion.
It's still close enough to the river to be HIS territory as far as he's concerned (which isn't far).

A mile down the road, passing between the Yacht club on one side and Country Club on the other, I come up to either a very new construction flager, or just the friendliest ever.
She's actually mouthing "thank you", grinning and waving to each slowly passing car that goes by - and there are dozens of us, at this moment.
Another twenty miles down the road, through St. Johns & over it's name sake bridge, my favorite in the area for it's 1920-ish cathedral window styled suspension towers....
North on Highway 30, "St. Helen's Road" out to Scappoose to do a little Gel Coat repair on a Silverton, then a pretty rugged six and a half hour wash and wipe on a fifty three Seline.
Couple of photos taken off the stern of the fifty-three, named "China Moon".
Little green "pocket cruiser", all of maybe sixteen feet or so in length - I like it.
Some Fella rowing his wooden boat up the Multnomah Channel, just at dusk, with Mt. St. Helen's through the trees in the background.
Just another day on the river.........not a bad life.

Email ThisBlogThis!Share to TwitterShare to FacebookShare to Pinterest
Labels: impressions, Life in the Pacific North West

lattes & rainy days: You know you're from the Pacific Northwest if ...

I remembered seeing a thing about us Pacific North-Westers a while back. When I googled it, I got this blog spot blog. It may be that you have to live here to get it. I find it amussing.

lattes & rainy days: You know you're from the Pacific Northwest if ...
Posted by John Ross Barnes at 7:32 AM No comments: