A Spillworthy, by John Ross and Johanna... 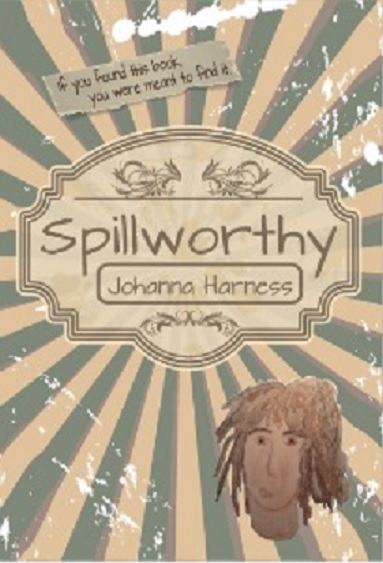 Imagine you just found some neatly folded pages, stuck conspicuously between the pole and the chain-link fence you often walk by. Scrawled on them you find a conversation of sorts...between people you do not know - yet...

Johanna:  Anyone want to have me stop by their blog during the Spillworthy release week?

John: Oh Hella-Yeah! Did I mention I really love this book?  It's got a good beat and you can dance to it. Wait, that didn't sound right...

Please let me know what I can do to help spread some Spillworthy around.

Johanna:  An interview would be fun--or really more of a conversation. We could do that.


John: That's certainly something we could do. Except you may have to prompt me. I just realized that I had never actually interviewed anyone when I was on the radio. I'm not sure I was ever actually on the air with anyone for longer than it took to pass off or take up a segment or a shift.


Johanna:  We could do a spillworthy then--just back and forth like Gem and Ulysses do in the book. When we're done, we'll release it on your blog.

John:  That sounds good. There is an aspect of this book I'd like to explore at some point, and that's how this book addresses some very real things that happen in people's heads and then leak out and get all over who or whatever is around them. The book kind of makes a point of that, doesn't it? To me, that would seem to be a major theme running through pretty much everyone who's anyone in the cast of characters. And those weirdnesses of thought or belief then inform the whole settings of the scenes, the movement of the plot, the correlation and causation that happen in the story. And of course there is that pattern of looking at what doesn't want to be seen throughout a number of your stories from Belle to Claire. What up wi dat?

Johanna: I'm just going to sit here and grin for a second. I'm so happy you see that in my stories.

Johanna: Well, we all have our own realities, don't we?  We interpret the world through whatever lens we've established for ourselves and generally we ignore the fact that there are other ways of seeing things. We look away from things that don't fit into our way of understanding the world. I don't think people do this because they're trying to be cruel to others.  We hold on to our existing paradigms, and when we feel them crumbling or slipping away, we hold on even more tightly--even if doing so takes us into weird thought patterns. We justify what we do based on tradition or upbringing because it's less personally catastrophic than rethinking how we've lived our lives up to that point.

There is a longing for connection that runs through most of what I write. And yes, a lot of tension in scenes and plots originates from characters not understanding each other on some really fundamental levels--and yet they need each other.

John:  This reminds me of a time in Salt Lake--at a little Arts Council building in the park across the street from my brother's house--when I got to go to a poetry reading with Chip Rawlins, who wrote the science/climatological book Sky’s Witness, and had a great elk hide jacket. A young poet was there who related her life as single woman in terms of the world of Barbie. Yes, the doll Barbie. She kinda looked like a fashion doll herself, and had this high little barbie voice, and - she was utterly brilliant. I wish I still had her chapbook, or could at least remember her name.

That stay in Salt Lake, I also got to hear some great Latino, mostly Chilean, poets who would read their poems in English and then Spanish.  Even though I don't really speak Spanish, I often thought the Spanish (original) versions sounded better, and conveyed more emotion. Pink amazon porpoises, choking on the ashes of the burning rainforest surrounding the river, rushing into the shallows, trying in vain to push through to deeper, wider water. Of course I can't remember any of their names either. It was twenty years ago, now. This was at my brother's Lutheran church and while we were listening to these wonderful poets, half the time in Spanish, a black gospel choir who borrowed the loft was practising, just barely audibly, two floors above us. It was a major diversity blast for me at the time.

Johanna: I love that image and, even more so, that potential for connection. I think you show that in your work more than I do. I have characters who really struggle to relate to each other. With your characters, that inter-connectedness is a fact of life. They can acknowledge it or not, but it's always there. Everything is connected.

John: Yes. I think "Everything is Connected to Everything Else," (which is one of the "Givens" of most Native American spirituality), will wind up proving to be one of those organically grown and derived-over-time threads, in the William Stafford - life-long-thread sense, that will run through the body of my writing. It's kind of a big deal to me. That, and "Balance is the Key." I was pretty proud of myself when I thought I had figured that one out all on my own, at about age fifteen or so, as if anyone ever really figures anything out "all on their own."

Johanna: I love your reference to William Stafford here. During the last two summers, I've attended Summer Fishtrap in Oregon. It's a gathering of writers, held in this beautiful place up in the The Wallowas, not far from where Chief Joseph is buried. This year our theme, "What The River Says," is a celebration of William Stafford's themes and ideals. So many writing conferences leave me overwhelmed with the business of writing--or feeling pressure because I started too late to ever achieve what others have accomplished.  Fishtrap centers me and puts me in the right headspace to keep writing for another year. Publishing is its own thing, but writing what matters--that has to come ahead of everything else.

John: So I'm reading kind of slow, this time through Spillworthy, because I want to be able to taste some things differently, or more, than I would if I read faster. Page 48, "They feel ashamed about being where they are, and their shame makes them easy targets." Yes, shame does make people easy targets because it makes them more vulnerable.

Being vulnerable draws predators, both from within and without the self. From within, in the form of all those negative feelings, self-destructive voices, fears, anxieties, and deadly depressions. The kind of depressions that sink below the rest of the green-grass lawn to become gaping maws of hell, inescapable tiger-traps, complete with poison tipped impaling spikes at the bottom.

And being vulnerable draws predators from without in the form of anyone who recognizes and knows how to use that vulnerability to their own advantage and is inclined to do so. One example just mentioned in Spillworthy, bad shepherds, charlatan preachers, intent on bending others to their own paranoid visions. Grief, and pain, on the profound end of the scale, will do it too of course, any major trauma that we can't let go of...

Johanna: Right. When we internalize the negative outside judgements, we continue being victimized, even when the predator is gone. It's like a poison that continues spreading through us for the rest of our lives.  I think about that with kids a lot and it worries me.

A few readers of Spillworthy have been surprised that I question authority figures more than most middle grade authors do. I don't produce an Officer Friendly to guide the kids through their problems. No teacher comes to the rescue. The characters have to make their own judgements and sometimes their help comes from unlikely places.

I grew up in a time when we implicitly trusted authority figures, and distrusted people who didn't look and act exactly like us. In my case, growing up in a lower middle class home, that meant I developed a great distrust for the wealthy people in our community. Others developed a distrust along racial or religious boundaries. Today we continue to see distrust of families or couples who look different than the families of our childhoods.

Again, I'm not convinced people do this to be cruel to others outside their group. They're looking for a sense of security. Somehow if they play by the rules and stay where they belong, they believe they will be safe. They believe their children will be safe.

That paradigm isn't working out so well. Not only does it spawn hatred of others who are not like us (no matter what that "us" is), it also gives people inside our circles too much power over our children. We keep seeing news stories about children abused by authority figures--abuse that ends up lasting for years.

John: Yes. There is that thing. We still tell kids that if they see cops, they're there to help. Still, with appalling stories of shooting, tazing, or other harm coming to people with mental illness or social/learning disabilities, I worry that telling our kids this might somehow lead them to harm.  I hope that Autism Awareness Days might help the constabulary become more able to recognize different types of disabilities and then react in some way less harmful than they have done in the past. I still tell my child that the police are there to help, and I have always experienced that be true, but I then add - "Don't make any sudden movements and do whatever they tell you." It goes back to seeing Individuals and individual situations as individual, in the context of the moment.

Johanna: Right, so we have to ask: how does this shape our teaching and our parenting? We want our kids to be safe, but we're not going to be able to follow them around their whole lives and shield them from harm. Plus? We can't keep putting up all these barriers for our kids. It goes back to that need for connection between people--our need for balance. We don't want our kids to be victims, but we don't want them to isolate themselves either. That means we have to talk to our children as soon as they're able to start processing the world on a more complex level. We must encourage them to move beyond profiling (for good or bad), and help them to consider individual actions, thoughts, words, context. It's a heavy responsibility. My hope is that a book like Spillworthy will open up some of those conversations in a hopeful, optimistic way.

What do you think?  Is this spillworthy done?  Is it ready to be released?

John: I think it is...Oh, other than perhaps to say, "This has been an impromptu,  no, let's face it, random Spillworthy with author Johanna Harness"  Basically, as you might find between the main characters of her newly released middle grade novel Spillworthy.


"And now for something completely different"... well no, actually, kind of the same - "For your viewing and listening pleasure", here's the best video I think I've seen for Pink Floyd, On The Turning Away, Live, with finely timed fades on great song/story imagery on Youtube.

Posted by John Ross Barnes at 5:09 AM